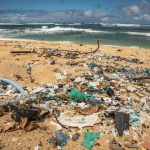 Plastic pollution in waterways and oceans is expected to double by 2030, according to the report From Pollution to Solution: a global assessment of marine litter and plastic pollution, released by the United Nations Environment Programme (UNEP) in October 2021. In 2016, the amount of plastic pollution entering marine environments annually was an estimated 9-23 million tons. Without critical intervention, this number could rise to about 53 million tons per year by 2030.

Managing plastic waste has been an issue since it was first produced. The UNEP report noted that of the approximately 9,200 million tons of plastic produced between 1950 and 2017, about 7,000 million tons became plastic waste. 75% of this waste ended up in landfills, mishandled waste streams, or dumped in the environment. Studies have found that over 50% of plastic found in certain ocean gyres was produced prior to the year 2000. Cumulatively, global plastic pollution from 1950 to 2050 is expected to reach 34 billion tons. With 85% of marine litter consisting of plastic, the need for reducing plastic usage and improved waste management is more apparent than ever.

The UN report noted that while there are solutions to the mounting plastic problem, recycling will not be enough. Less than 10% of plastic produced is recycled and approximately $80-120 billion is lost annually in order to process plastic waste. Often what is not recycled in the United States is sent overseas to be incinerated. It is estimated that by 2040, the greenhouse gas emissions from the production, use, and disposal of conventional plastics will make up 19% of the global carbon budget outlined in the Paris Agreement. Even products boasting “biodegradable” on their labels or posing as plastic alternatives can be just as harmful to humans, organisms, and ecosystems as they can take years to break down when littered in the ocean.

The economic costs of marine litter are often overlooked. In 2020, the global plastic market was deemed to be worth around $580 billion. The monetary value of marine natural capital loss is approximately $2.5 trillion annually. Globally, the economic loss due to plastic pollution in 2018 was at least $6-19 billion, not including the loss of ecosystem goods and services such as clean air, water, soil, and food. In order to see meaningful change in plastic production and pollution, legislation needs to be enacted that places the financial responsibility of plastic waste on manufacturers.

While the information in this report is sobering, it is important not to be discouraged by it. Instead, use it as motivation for change. This report will be used by world leaders and citizen scientists alike to inspire innovative solutions to the marine plastic pollution crisis. To learn more about how you can make a difference, visit our Action Page.