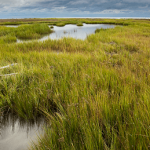 You may never have heard of blue carbon, but the concept is quite simple. Blue carbon is the carbon stored in marine ecosystems. These carbon sinks are essential systems that absorb more carbon dioxide than they produce through photosynthesis, thus decreasing carbon emissions that lead to climate change. While forests are a common example when discussing carbon sinks, coastal ecosystems such as wetlands and mangroves are even more efficient at sequestering carbon. This blue carbon is often stored beneath the ocean’s floor for thousands of years. For example, seagrass meadows hold over 95% of their stored carbon in subaqueous soil.

Carbon dioxide is a major greenhouse gas that is being released through human activities at an unsustainably rapid rate. When coastal habitats are damaged, blue carbon is released back into the atmosphere. This further disrupts the natural cycling of carbon dioxide in the environment by adding more carbon than can be absorbed by already dwindling ecosystems and exacerbating climate change caused by excessive atmospheric carbon.

The destruction of carbon-sequestering coastal habitats is caused in part by natural threats and human activity. Since the 1600s, hundreds of millions of wetlands have been drained and constructed for human use. In just five years, from 2004 to 2009, it is estimated that 62,300 acres of wetlands were destroyed in the continental United States. Natural phenomena such as erosion, sediment buildup, drought, storms, and subsidence can damage coastal habitat. These natural threats and habitat damage are exacerbated by human activities such as dredging, draining, material deposition, mining, logging, pollution, introduction of invasive species, and coastal construction and development.

Boating and fishing are large chemical and plastic polluters, but some of the most destructive activities occur on land. Runoff from industrial, urban, and agricultural activities into water bodies can cause increases in nutrients, such as nitrogen and phosphorus. This rapid increase in nutrients leads to abnormally rapid blooms of algae and/or phytoplankton, a process called eutrophication. The algae is consumed by invertebrates and then fish, allowing their populations to expand. After these organisms consume the majority of dissolved oxygen in the water, they die-off. The resulting anoxic water, where plants and animals cannot survive, creates areas known as “dead zones”.

Further climate change will only cause an unsustainable carbon loop where more carbon is produced by humans than can be taken in by the environment. While more blue carbon habitat is compromised by climate change side effects such as warmer temperatures, precipitation changes, sea level rise, and drought, there will be less carbon absorbed by these vital carbon sinks and an abundance of climate-altering atmospheric carbon.

Marine habitat conservation and restoration are the key to promoting blue carbon sinks and preventing additional releases of carbon into the atmosphere. One potential conservation approach includes a financial incentive for corporations to release less carbon dioxide through carbon offsets. Carbon-producing industries would be required to purchase carbon offset credits to promote carbon reduction activities elsewhere. If a company stopped producing carbon they could retire their credit, creating a carbon-neutral system. Organizations such as The Blue Carbon Initiative are working to promote policy change, develop coastal ecosystem conservation projects, and further research blue carbon systems to protect the vital ecosystem service that blue carbon provides.