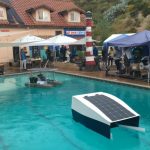 On a rainy Saturday morning in May, Clear Blue Sea held its first joint demo-day with two of its senior engineering design teams that each built a small Floating Robot for Eliminating Debris, aka FRED, prototype. Both teams have been working hard over the academic year (Sep 2018 – May 2019) to design and build their mini FREDs, and we couldn’t be more proud of the results they achieved. Both teams were given the same engineering requirements – essentially the functions the robots must be able to perform at the end of the project – and we were interested to see the different approaches they would take to solve the problem at hand.

The “Plastic Pirates” from San Diego State University built their robot prototype to look similar to the Clear Blue Sea FRED Conceptual model, which required designing and building the hulls and vessel structure entirely from scratch. The “Trashy Pelicans” and “FRED’s Angels” from University of San Diego wanted to show more of the functions their robot was performing, so optimized time and cost by purchasing commercially-available parts and customizing the build to ensure their robot met project requirements. Both teams ended up designing similar subsystems, including a catamaran dual-hulled base, a conveyor belt as a collection system, and sustainable solar power and batteries to make the robots fossil-free.

Both teams demonstrated their robots picking up floating debris at the San Diego Scuba Center test pool, and we even had them race around to test speed and remote control of the robots. Clear Blue Sea plans to continue to enhance and demonstrate these mini prototypes to help in the long term development of FRED and also in raising awareness here in San Diego of the ocean plastic pollution problem.